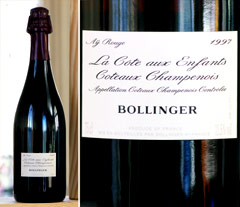 ã Characteristics of the 1997 harvest

The winter of 1997 was particularly capricious.  First it was very cold, then mild, with numerous frosts during spring.  Flowering was early, between the 10th and 15th of June, but was followed by very cold and rainy weather that brought millerandage (partial crop failure) and coulure (abnormal fruit set) followed by an epidemic of mildew.

Summer was characterized by surprises: July was hot and dry, August very hot with two stormy periods, while September turned cold and dry.  Harvest began, depending on the cru and grape variety, between September 15 and 22, under dry, warm conditions that produced healthy grapes and reminded many of 1959.  Cote aux Enfants was harvested on September 23.

ã Origin of the grapes

Côte aux Enfants is made from grapes from a small plot, of 80 ares (just over two acres), located in the heart of the terroir of Aÿ, a Champagne grand cru. Exceptional for its exposure and the quality of its soil, it is planted exclusively to Pinot Noir. This vineyard is specifically cultivated, with a green harvest that reduces the yield to 8,500 kgs per hectare.

At harvest, each individual basket of grapes is sorted a la clayette, on a flat wooden surface in the vineyards to remove all rot.  The grapes are then completely destemmed and the wine is made exclusively from free-run juice (jus de goutte).  The wine macerates on its skins during fermentation for 10 to 12 days and is then aged for a maximum of two years, in 205 litres oak barrels, which are three to five years old.

Visit  www.champagne-bollinger.fr  for the complete history of Bollinger