Between Wind and Waves: Ekranoplans  http://wiki.vostokwatches.eu/ekranoplan.html
Craft that look like aeroplanes but don't fly. Boats with wings that appear to fly. Technology well in advance of that seen in the United States but developed on the other side of what was then the Iron Curtain. A bizarre cross between a hovercraft and an aeroplane... Each is an apt description for the mighty Soviet Ekranoplans - surely some of the most exciting vehicles ever to navigate across the surface of this planet. What's just so astonishing is almost no one has ever even heard of them...

I'd heard vague reports - aeroplanes that flew solely in the ground effect layer only a few metres above the ground. Or, more accurately, flew above lakes or the sea. And I'd occasionally thought of them when I'd seen birds use that cushion of air between their wings and the ground to stretch their glide by hundreds of metres. But I'd mentally shuffled these weird craft into the same space as personal vertical take-off back-packs... nice idea, but not here yet. 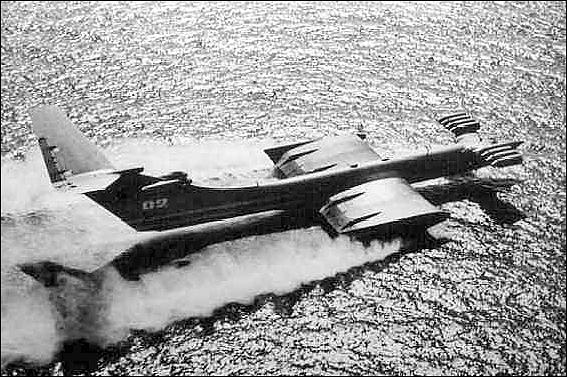 But the wing-in-ground-effect (WIG) craft have been more than just an idea for decades - in the old Soviet Union they were a reality weighing up to 540 tons, 'flying' just a few metres above the surface. Oh yes, and way back in the mid-late 1960s - when the pictured craft was being tested in anger - it weighed double the heaviest conventional aircraft. It had a length of 348 feet and a wingspan of 131 feet - no wonder the United States (spying on it via satellites) dubbed it the Caspian Sea Monster! 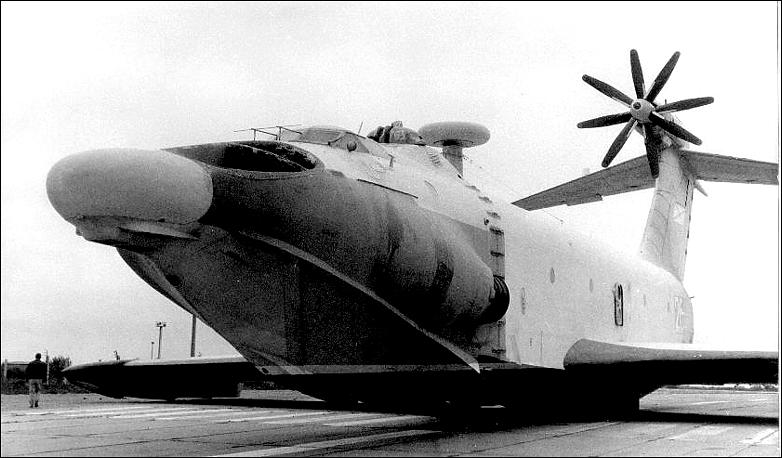 And while the Caspian Sea Monster remains the biggest ground effect vehicle ever built, it was not a one-off of the new technology. On the contrary, the Soviet Union had a major program of wing-in-ground-effect craft, including the proposed building of no les than 120 Orlyonok A90.125 troop transport and assault craft. Only four were in fact constructed, but the pictured craft worked effectively, carrying 15 - 28 tonnes of payload at up to 400 km/h, just above the sea!

To have seen one at speed must surely rank alongside seeing a Boeing 747 take off or the Space Shuttle coming in to land... 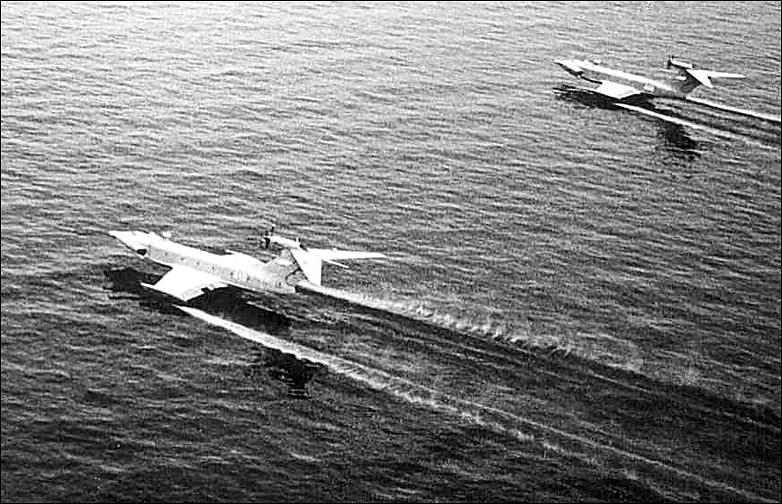 A WIG craft can be seen as a cross between a hovercraft and an aircraft. Since it is usually flying above water, it's occasionally also referred to as WISES (Wing In Surface Effect Ship). The Russians use the word Ekranoplan (sometimes misspelled 'Ekranoplane'), while wingship (US) and Aerodynamic Ground Effect Craft (Germany) are also used.

So just what is this ground effect that we keep referring to? 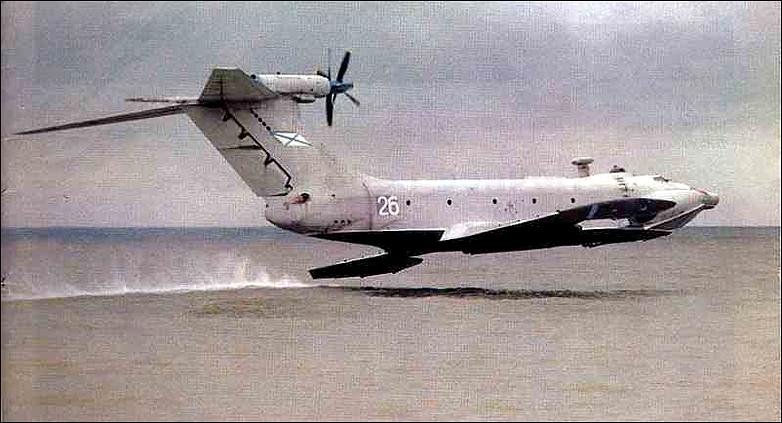 Since the beginning of manned flight, pilots have experienced something strange when landing an aircraft. Just before touchdown, it suddenly feels that the aircraft wants to keep on flying - to go on and on due to the air cushion that is trapped between the wing and the runway. The effect is most noticeable in aircraft with low and large wings. This phenomenon is called (aerodynamic) ground effect.

The Wright brothers probably never flew out of ground effect in their early flights; they benefited from ground effect without even knowing it existed. 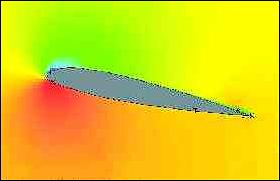 These images of the pressure distributions around wings clearly show the ground effect. The red colour shows the area of high pressure, while green is ambient pressure and blue is low pressure. The red area is relatively small under the wind in free air...

The maximum lift/drag ratio of an airliner in cruise flight is close to 20 and smaller aircraft may be around 15. Ground effect aircraft can reach numbers as high as 23. Furthermore, really large WIG craft (larger than any in fact so far built) could use less than half as much fuel per kg of delivered cargo when compared with conventional aircraft. 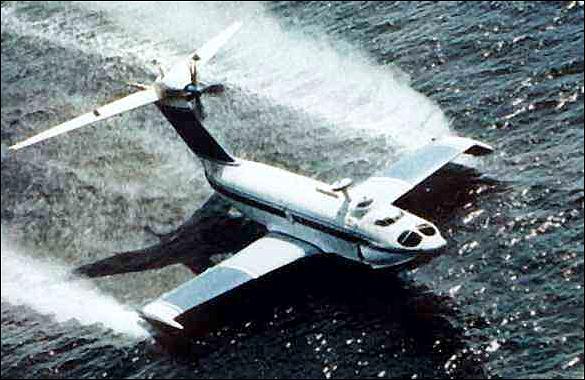 So why aren't we all zipping across harbours and oceans in WIG craft? One reason is that just like the once common flying boats, WIG craft experience problems at take-off. A relatively high take-off speed (even compared to a speedboat), leads to enormous hydrodynamic (ie water) loads on the structure.

When you're in a conventional aeroplane speeding down the runway, it always seems to take an age to lift-off... engines straining to overcome primarily the inertia of the aeroplane. But what if in addition to inertia, the plane was also trying to displace water - instead of just air? 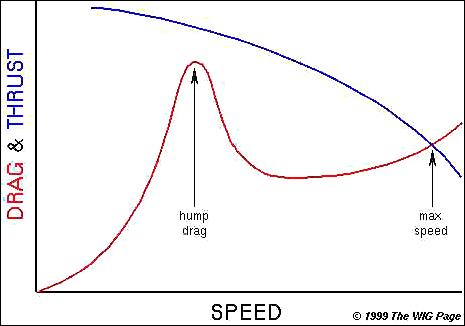 There is a bow wave in front of an object moving through the water at the surface. This wave becomes higher as the speed increases - and this wave is a source of drag. Both wave drag and (hydrodynamic) friction drag are very high for WIG craft when they approach lift-off speed - so high that they determine how much engine power needs to be installed.

The maximum drag often occurs well before the take-off speed - an odd phenomenon that happens because the craft needs to get onto plane (climbing its own bow wave) before it can go faster. In this graph the drag (red line) is shown in relation to speed, with the blue line showing the thrust of the engine. The theoretical maximum speed that this craft can reach is the point where the lines cross. Significantly, the hump drag may be as much as 2 to 3 times higher than the drag in cruise flight.

So in other words, a bloody big engine needs to be carted along during the whole flight, just so that enough speed can be created during take-off to get off the water! Other alternatives include using some engines only during take-off - a common approach in the Ekranoplans. 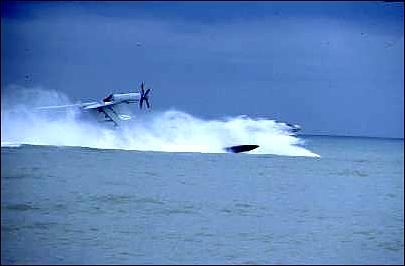 Various solutions have been tried to decreasing hump drag - stepped hulls, hydro-skis (the Orlyonok discussed below uses pneumatically damped hydro-skis), hydrofoils - and finally, probably the most effective approach, Power Augmentation of Ram wings (PAR), where the craft's engine is used to blow air under the wings. 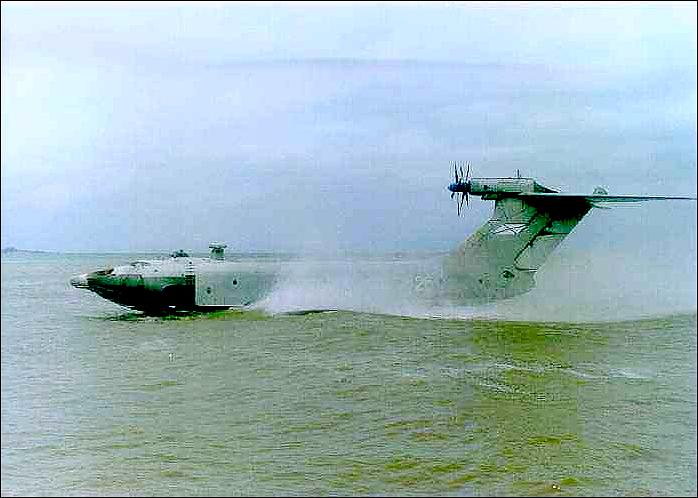 So where would (or do) WIG craft fit into the transport spectrum? Currently, they could be used for fast passenger ships (a cruise speed range of 100 to 400 km/h) with a range of up to about 250km. The only competitors for them in that application would be turboprop aircraft - they are close in specifications. The obvious advantage of WIG craft in this case would be its flexibility - there would be no need for a runway, as any existing port would do. Of course WIG craft would be restricted to operation in coastal areas or large lakes where the wave height is limited. This is especially true for relatively small WIG craft - the larger the craft, the higher it can fly while still being in ground effect. 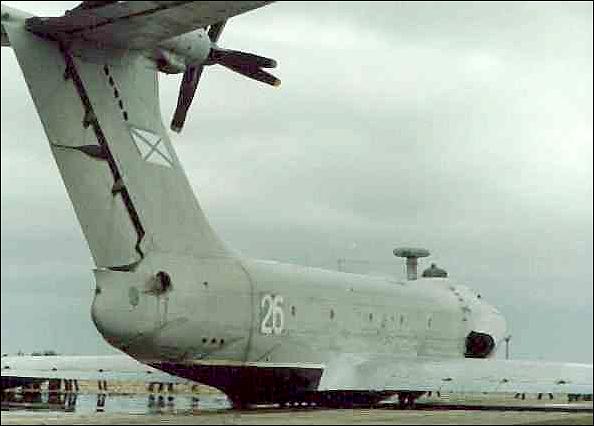 The Orlyonok shown through this article is an example of one type of the many Ekranoplans built in the USSR during the time of that political regime.

The original plans were to build 120 Orlyonoks as troop transport and assault vehicles, but only 4 have been built, one of which has been used for static tests only. The first Orlyonok crashed during a VIP demo flight in 1974; this one has been rebuilt using a new alloy. (This is the reason why some sources state that 5 Orlyonoks have been built.)

The first Orlyonok was launched in the Volga river in Autumn 1973. It was a 140-ton amphibious craft, able to taxi up out of water onto land. With a length of 58 metres, a wingspan of 31.5 metres and a height of 16 metres, it was no small machine. (To give a guide, it was 80 per cent of the length of a Boeing 747 jumbo jet!) Displaying technology far in advance of that being exploited elsewhere in the world, the Soviets were at pains to keep it secret. For anyone who enquired, the craft was said to be "the floating stand for improvement of new engines of high-speed boats". 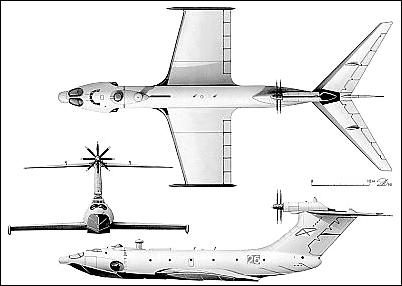 The craft used the PAR approach, with forward-mounted jets blowing under the wings to enhance lift on take-off. This engine installation consisted of two Kuznetsov NK-8-4K turbojet engines each developing 10.5 tons of thrust, while the cruise engine was an 11,000kW Kuznetsov NK-12MK turboprop. To prevent the ingestion of water and dust, the air intakes were placed high and forward - in fact in front of the canopy windshield. Rotary jet exhausts for the turbojet engines allowed the directing of the engine's exhaust under a wing (mode blow-under) or above a wing (if increase of draft in cruise flight was necessary).

The engines - normally used in less demanding environments - needed to be modified for the Orlyonok application. The modifications were aimed at protecting the units against the corrosive affects of sea water, providing reinforcement to cope with the vibration overloads when taking off from a rough surface, giving protection of the engine air intakes against birdstrikes (a much more likely occurrence when working offshore), and the development of a computer monitoring system to reduce crew workload. 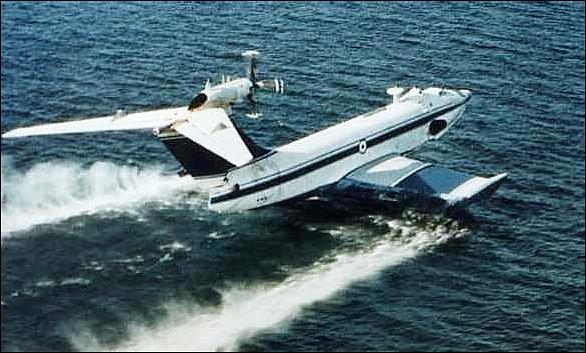 The mid-flight turboprop engine utilized two counter-rotating propellers, each with a diameter of 6 metres. The fuel tanks were located in the wing roots. A five-sectioned flap/aileron was fitted on the wing's trailing edge and the leading edge featured takeoff screens near the wingtips. Located under the fuselage were two hydroskis: one at the centre of gravity and one near the front. 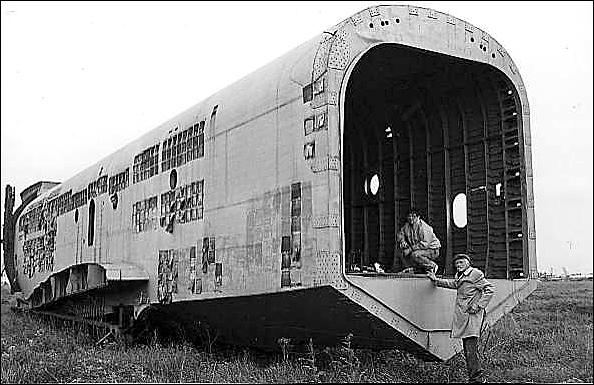 The Orlyonok entered service in October 1979 in the Soviet Navy. One was lost in a crash in 1992; unfortunately the crew didn't survive the accident. The last flight of the Orlyonok took place in October 1993. Currently the remaining Orlyonoks are rusting and falling apart at their base, Kaspiisk Naval Air Base. 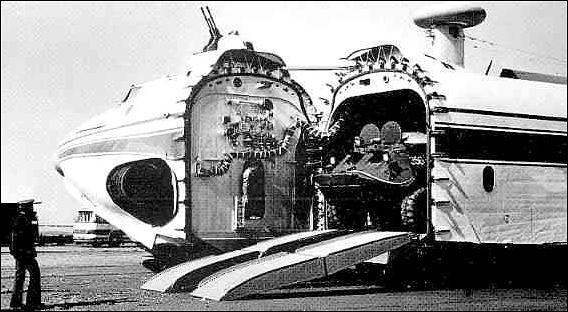 At least one of the prototypes of the Orlyonok was fitted with a split fuselage freight door. There have been plans to modify a surviving Orlyonok as a transport, carrying up to 150 passengers in a single deck layout or up to an astonishing 350 passengers in a twin deck layout, but this is now unlikely to ever happen.

Curiously, the model company Revell has produced a 1/144 scale of the Orlyonok (it's shown here) which appears quite accurate.

Since the collapse of the Soviet Union, the plant responsible for building the Orlyonoks has been privatised. Now called the Volga Shipyard, the Orlyonok is apparently still being developed as a commercial search and rescue craft. In fact, it appears that the Orlyonok can be ordered in either cargo-carrying (50 tons with a 1500km range) or in passenger carrying (30 people and a 3000km range) versions - the yard lists it as a production model!


Official Book Description (Penguin)
Bond is back with a license to thrill. Forty-three years ago, Ian Fleming wrote his last great 007 adventure. Now, in Devil May Care, the world’s most iconic spy returns in a Cold War story spanning the world’s exotic locations. By invitation of the Fleming estate to mark the centenary of his birth, acclaimed novelist Sebastian Faulks picks up where Fleming left off, writing a tour de force that will electrify every James Bond fan. A fitting tribute to the Bond tradition, Devil May Care stands on its own as a triumph of witty prose and plenty of double-0 action.

“One day, Bond, I will make as many heroin addicts in Britain as Britain made in China. You’ll become the third world country you deserve to be.” -- Villain Julius Gorner 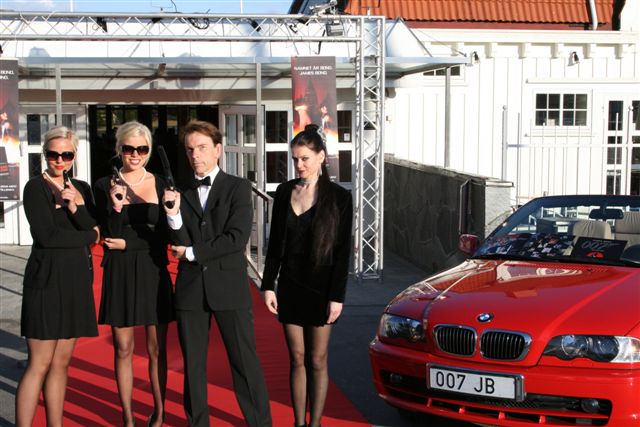 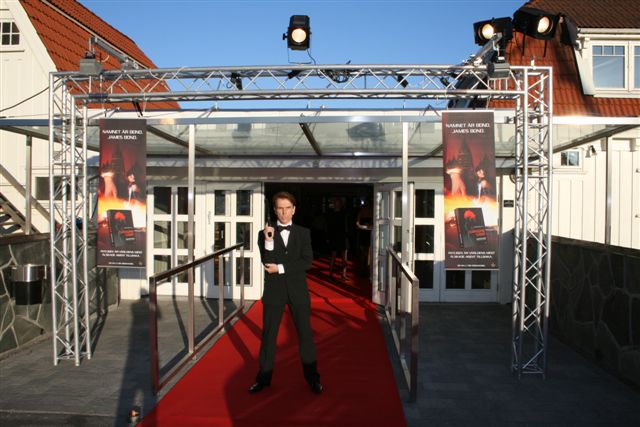 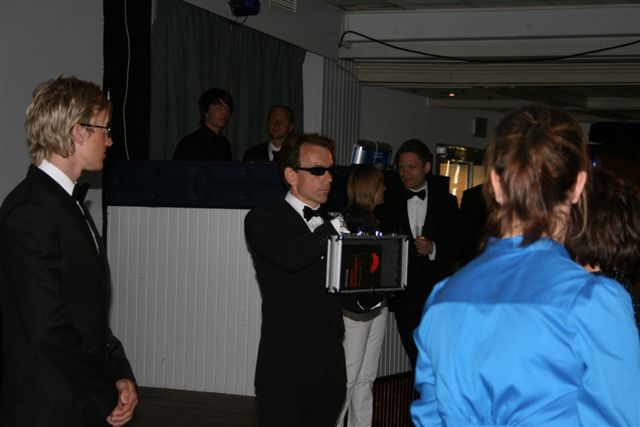 THE DEVIL MAY CARE THEME TUNE 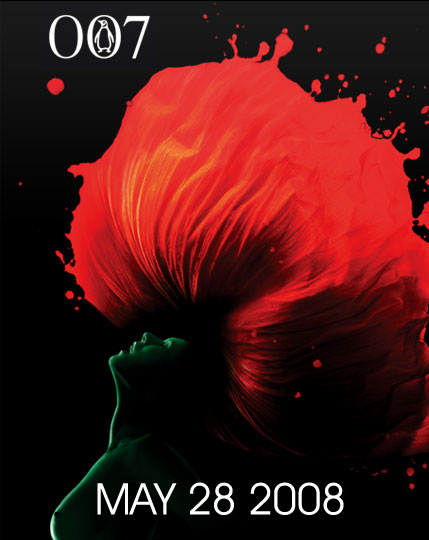 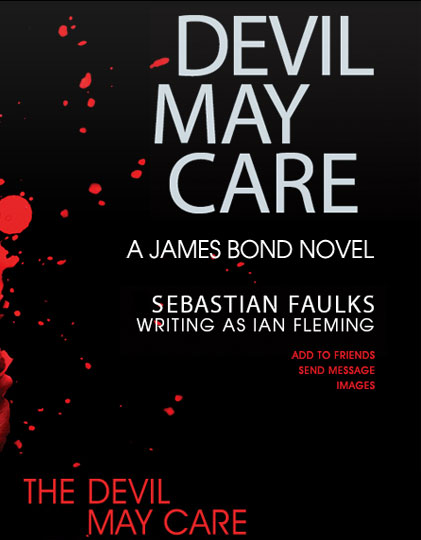 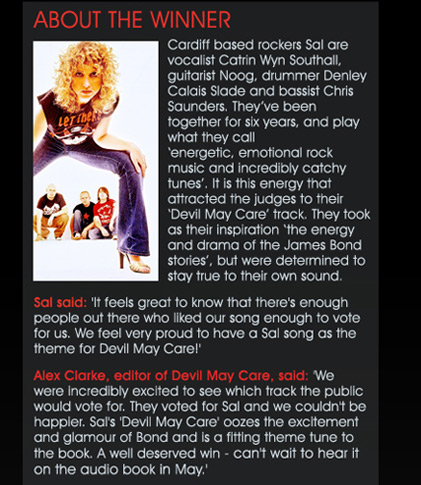